A good friend of mine asked me to let him know what I learned from my recent business experience in New York City (NYC), in terms of people, business and myself.

His question was intriguing, and the reason I can barely keep an eye open as I write this, and yet I keep stroking the keys on my laptop as I make my way from JFK airport to Larnaca, Cyprus.

What I learned when it comes to “Business”

It was the legendary band “Queen” who released the song “The Show Must Go On” in 1991 and it is evident in 2018 and beyond that in New York City (and in the USA in general) that the show must go on.

Five intense working days in New York City had come to an end, and the Management of The American P&I Club took me to a comedy show with a view to unwinding through copious amounts of laughter.

Just about halfway into the show, some of the front row seat customers found the comedian’s jokes offending. My personal view is that they were not, and that the comedians in this show must not censor what they say, but instead stay true to their acts, maintain their creative and artistic identity.

Havoc took over laughter and the owner of the place (who also happened to be the Microphone Controller and lead comedian) had the perpetrators thrown out, among them a transvestite comedian who took to the stage. My credit goes to the comedy club and the MC in the way they handled the situation. They saved the day by handing out $40-complimentary tickets for any of their upcoming performances to each customer. The takeaway is that you should not only recover as a business – if something goes wrong – but aim to come out on top.

On a certain evening during my stay in NYC, I called room service at the Wagner Hotel at 4am. Stomach pain interrupted my sleep and I felt that I needed to order a large bottle of sparkling water to aid digestion. 4:10am, just after the bottled arrived at my room, the Manager on Duty, Aziz Bachaouch, called to enquire about my health and to inform me that he will not charge me for the food that I had the evening before via room service. In the morning, just minutes after I woke up, the other Manager on Duty, Yajaira Cintron, followed up to see if I was well. Caring is part of the customer experience and both Managers on duty made sure that my experience was immaculate. They also managed to turn a satisfied customer into a loyal one; one that will definitely stay at the same hotel during his next visit to The Big Apple. 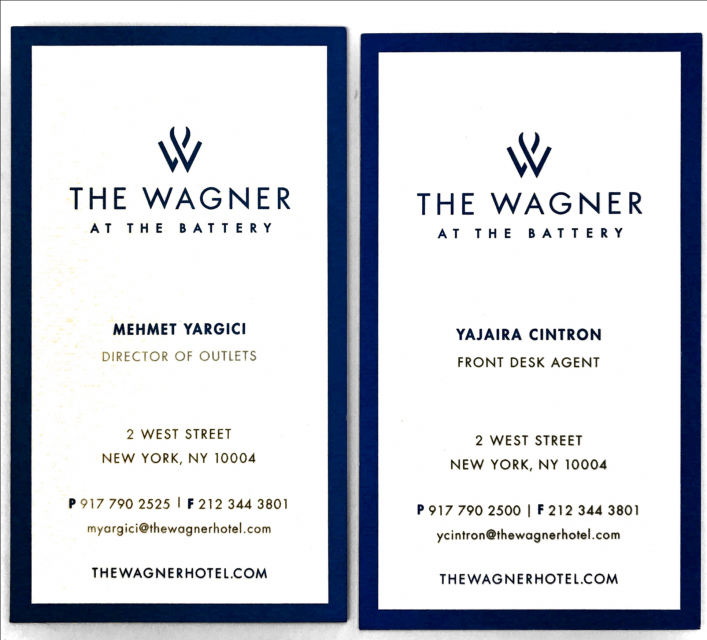 A 20% “discretionary” tip is customary in all NYC establishments that serve customers. This custom, in turn, reinforces the ‘customer is king’ philosophy, by making the service customer-centric and the waiters exceptional at what they do, which is to go out of their way to please the customer. After all, the large majority of service providers are without a salary. Their income is based on the tips they receive which are in turn based – in the majority of cases – on the outcome of their customer service.

What did I learn when it comes to “People”

During the second day into my NYC experience, I felt like having one of those famous – and juicy – USA steaks! And which better steak destination than Morton’s (even though there are many options to choose from)? The steak was wonderful and as I was making my way out of the restaurant, the Manager – Frank Gojcaj – said “Goodbye Mr. Virardi!” At first, I didn’t read much into that, even though I enjoyed being recognized, as I had given my name and surname upon arrival. Fast-forward 48 hours, and I walk again into the same restaurant to enjoy the same cut of meat that I did just 2 days earlier. Frank was standing at the door once again and he said ‘Welcome back Mr. Virardi!’. This time I was utterly S U R P R I S E D to say the least. Judging from the sheer size of the establishment, another 500-1000 people must have probably have walked in and out of Morton’s during those 48 hours. The City is huge and so is the number of locals and tourists, who probably run in the millions. And yet Frank, Morton’s and all the major players at the restaurants I frequented are acting as if they are living on my island, Cyprus, where the numbers “don’t add up”. They are big and acting like they are ‘small’ and that’s the attitude (humble, restless, customer-driven, loyalty-driven professionals) I experienced in over 80% of the service providers in NYC.

Again, a lesson from the Wagner Hotel. This time it was the bellboy, Akther from India, that made an impression on me. He escorted me to my room and carried my luggage as well. After explaining all of the room’s amenities he handed me a TripAdvisor business card which has a line prompting you to go to TripAdvisor and share your positive experience at his hotel with the world at large. 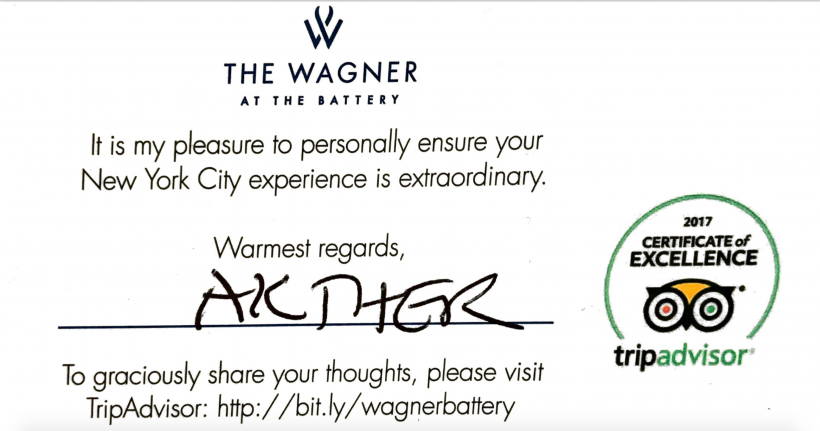 The lesson here is that there should be no stone unturned in the ‘fight’ for customer loyalty in a word driven by word-of-mouth advertising, powered by social media. No job and no professional should be looked down upon. Everyone must chip in when it comes to the customer experience and front-line employees are empowered accordingly with both business cards and attitudes that are built through training.

What did I learn when it comes to “myself

It was Lao Tzu (Chinese Taoist Philosopher), who said, that “mastering others is strength but mastering yourself is true power.” Attributed to the Greek philosopher Socrates and inscribed on the forecourt of the Temple of Apollo at Delphi is the proverb “Know Thyself.” Combine the two sayings and it won’t take you long to conclude that, knowing yourself and what makes you a better person and an effective professional, is one of the keys to personal success.

As a trainer and a facilitator, being in NYC is a dream come true. The USA (and NYC in particular) is the Mecca of training and development. Customers, the likes of The American P&I Club who hired me, have a choice of over 9,000 trainers, some of which are among the most recognized names in the world.

My takeaway is that with the proper preparation you can play with “the big boys.” In cities like NYC it is inevitable that you are bound to raise your game too.  Intimidation should give way to preparation. Feedback triangulation is my secret formula to success – I ask everyone for their opinion, the most recent example being that I flew to Athens instead of doing Skype which was the fast way out, to get a feel of what Dorothea and Vince (part of the top management of the company) wanted me to do while in NYC. Triangulate means asking i.e. you get a bad diagnosis (God forbid), then you go to 3 doctors to triangulate results and proposed therapies.

Last year, I held a one-day workshop, this year a two-day workshop and three days in one-to-one coaching sessions and now I am asked to be back in NYC for the same company every quarter. Meeting expectations is not enough anymore; you should strive to exceed expectations if you want to be successful in whatever it is that you are doing.

The USA is considered the land of opportunity; not so much because of its sheer size – on my way to the airport I observed developments in just one part of a certain neighborhood which, according to the taxi driver, amounted to $20 billion – but because of the ‘size’, capacity and mentality of its people. It is people who drive the businesses, which, in turn, results in a prosperous economy. And the key behind all of the above is attitude. An attitude of gratitude, and that’s exactly what I have received throughout my business experience in NYC.