Good stories and anecdotes touch us and great ones move us.

Stephen King once said in an interview, “Stories are found things, like fossils in the ground. Stories are relics, part of an undiscovered pre-existing world.” And the same can be said for anecdotes, which are basically short stories. A Stanford research study showed that statistics alone have a retention rate of 5-10%, but when coupled with anecdotes, the retention rate rises to 65-70%.

There is a game we play in some of the workshops that I run and it is called the ‘Cube Exercise’. Participants are asked in pairs to combine the materials they have in front of them (ample A4 paper, scissors, ruler, Blu Tack, glue and some peculiar-looking stickers) so as to make a cube. Any kind or shape or size of cube will do. Creativity runs wild. 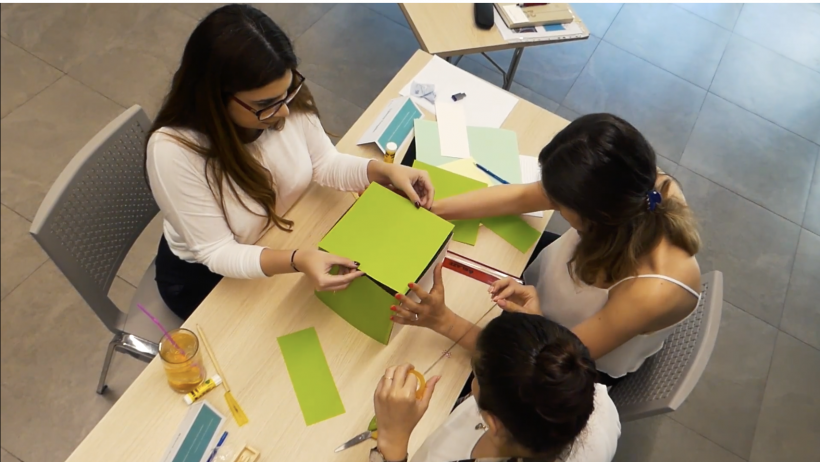 Then we have two rounds, with both rounds carrying a voting. In round one, 10 teams, each comprising 2 participants, give their cube a name and put it up for (secret) voting. Rankings are revealed, a winner is announced. Then we have round two, a secondary voting, with all things being equal except that now each team thinks of a story to accompany the presentation of its cube, takes center stage and shares it with the rest of the room. As the cube stories are taken in by the rest of the participants, something magical happens in each and every workshop. The scoring tables are turned. The cube that has been awarded position number one in the first round, may find itself well into the last positions of the collective ranking. Similarly, the cube that landed last position during the first round might as well – and probably will – find itself in position number one.

What was the invisible force that came into play in round 2 and upset the score?

As you have probably guessed by now, said ‘upset’ is a direct result of the story that accompanies each cube. All the other things remain equal, apart from the story that is being uttered, which is analogous to putting on a verbal “dress” on an otherwise “naked” cube, buttoning it up down to the last word.

Stories have the power to change our lives. Stories underpin cultures of companies, corporations, and entire countries. Children (and adults) learn what to do and how to go about doing it by listening to the stories narrated by parents (and friends). Great stories have the ability to transcend generations, being passed down from grandparent to grandchild, changing perceptions and shaping personalities along the way.

A story made my wife “move”

Mar Y Sol are in the business of selling beach bags and accessories. Their market may not be unique or what you would call “niche” but their story certainly is.

It is so unique, in fact, that in their website, they don’t have an “About Us” section but an “Our Story” section. If you click on it, you will find two things in there - a paragraph and a video. The former tells their story; the latter shows it. Both mediums are equally powerful, as they are effective in overriding your sensory system, winning your emotions over.

Then you have the faces behind the words, each such face a different story. Stories have the ability to bring products and services to life.

A story was the invisible force behind the scoring ‘upset’ experienced in my workshops when doing the ‘Cube Exercise’, every single time.

A story “moved” my wife into buying a bag from Mar Y Sol.

Come to think about it, my wife didn’t buy a bag that day. What she bought, was a story.

Pamela B. Rutledge of Psychology Today argues that “stories are authentic human experiences. Stories leap frog the technology and bring us to the core of experience, as any good storyteller knows”.

Being a good storyteller is not merely important - it is an absolute necessity. People indulge in a good story, in the same way as they do with a good movie or a good book. They travel through it. They visit its places. They meet its people. They feel the feelings embedded therein. In the end, they are “moved” enough so as to take action, and this is the ultimate goal of a story - to call people into action.

It is survival of the fittest (storyteller).

What is your story?