Almost no organization can survive in the long-term by employing bad managers and no employee likes a boss who doesn’t care or is rude. Randstad US data shows 60 percent of respondents say they have left a job or would leave over a bad boss. The members of a team will respect someone who is capable and efficient but they will be much more willing to go the extra mile for a manager who also shows kindness and compassion when required.

As the American physician, philosopher and author, Dr. Debasish Mridha, says, 'Kindness rarely costs anything, but its worth is immeasurable.'

What does a really bad manager look like? What behaviour should you try to avoid if you don’t want your best employees to leave the company? Here are some basic things that you should not do:

The fastest way to diminish your authority and destroy your people’s morale is to yell at them. According to a 2015 NHS Staff Survey, where 299.000 staff responses were gathered, about 25% have experienced harassment, bullying or abuse from fellow staff. When you routinely show anger towards colleagues, they will bond together for mutual support and comfort -against you. Yelling clearly shows that you are out of control and – irrespective of your capabilities – you need to be aware that no-one respects those who are incapable of controlling themselves. As I often say in my leadership workshops, “To err is human; To yell is inhumane.”

As a manager, you will most likely be judged according to your team’s success – or lack of it.  A good manager not only has the well-being of his team members as a top priority; he considers himself part of the team and, therefore, responsible for failures as well as successes. If you are judgmental (characterized by a tendency to judge harshly) and quick to blame everyone except yourself, you will affect the attitudes and productivity of your people as well as the overall tone of the workplace. It is not by chance that a quick online search offers the following advice to employees experiencing a “judgmental manager”: “Find a new job as quickly as you can”. Is that what you want?

Micromanagement is exactly what it sounds like: a manager is trying to control and monitor each and every aspect of any project, right down to prescribing the individual tasks. “Micromanagement is generally considered to have a negative connotation mainly due to the fact that it shows a lack of freedom in the workplace” says Wikipedia, while Merriam Webster’s Online Dictionary defines it as managing “especially with excessive control or attention to details". Nobody likes micromanagement, in part because, as General George S. Patton once notably stated, “Never tell people how to do things. Tell them what to do and they will surprise you with their ingenuity”. If you recognise yourself as a micromanager, it means that you are either not hiring the right people or you have a serious issue of trust in your people. A micromanager is a bad manager.

4. Use fear as motivation

Bad managers believe that the way to make people work hard is to make them afraid to give anything less than their best. Nothing could be further from the truth. As the award-winning US author, feminist, and social justice activist, L.R.Knost has said, “Fear and trust cannot coexist”and it is a fact that fear of a manager prevents employees from trusting him and making a greater effort for him. As the celebrated French author and philosopher Albert Camus put it bluntly: “Nothing is more despicable than respect based on fear.”

The worst managers fail to assess facts and situations appropriately, thus burdening their teams with unrealistic expectations. Instead of making an effort to understand the practical details in implementing their often-grandiose ideas, they simply expect things to be done successfully, as if by magic. Planning is everything and my advice is to break tasks into subtasks and to put everything down in writing. Before even the simplest building is constructed, an architect has to draw up plans for it. The same applies to every project, from the biggest down to the smallest.

6. Blame the team for failures

The 33rd US President, Harry S. Truman, famously had a sign on his desk in the Oval Office, which said: "The buck stops here". He wished to demonstrate that, as the ‘manager’ of his country, the President takes the final decisions and accepts ultimate responsibility for them. As a popular business expression goes, "Bad managers take all the credit for success and blame their employees for failure, while goodmanagers take the blame for failures and share the credit for success". If you want to be considered a bad manager, this is a fast-track way to do it.

Being a bad manager is very easy. You just have to talk all the time and listen to no- one else, especially to those who are capable of contributing and taking your organization to the next level. This creates an environment with very low psychological safety and may explain a number of corporate, engineering or medical failures, according to Harvard professor Amy Edmondson in her book “The Fearless Organization”. When people know that, whatever they say or propose, they will be ignored, they will stop trying. They will not even bother to point out where you are mistaken. The bad manager will hold everyone responsible for the company’s failure when, in reality, he has only himself to blame.

In these rapidly changing times, with economic uncertainty looming at all times, the need for companies to attract, retain and motivate good employees is paramount. An effective manager knows that gaining his people’s loyalty and trust, will, in turn, help the organization not only become more profitable but also gain a reputation as being home to a happy, inspired and motivated workforce. A manager who incorporates any or – hopefully not! – all of the above 7 bad management methods into their day-to-day behaviour can say goodbye to his best employees and his own career.

Think of one of the most effective managers you have worked with: What is the most memorable trait they exhibited and how did it inspire you to excel at work? I’ll be delighted to hear from you. 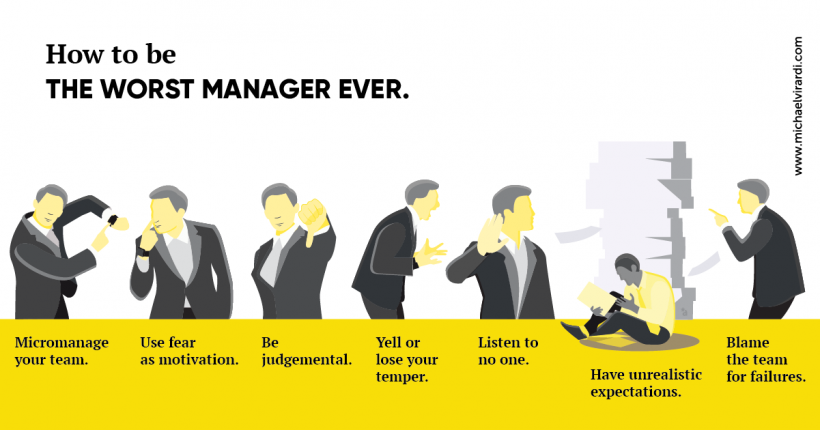